The Sacramento City Council Tuesday unanimously approved raising solid waste disposal fees by $3.83 a month for each of the next three years, largely to pay for a new state requirement that cities collect and compost food waste from customers.

Photo by SHVETS production from Pexels

Photo by KoolShooters from Pexels

ECOS has submitted a letter in regards to environmental and public interest representation as part of the Regional Water Authority’s efforts to develop a regional water bank.

When you do your Christmas shopping online, shop at AmazonSmile and you can support the Environmental Council of Sacramento (ECOS) at the same time. AmazonSmile is a simple and easy way to support ECOS when you shop for Christmas gifts, at no cost to you.

AmazonSmile is a simple way for you to support the Environmental Council of Sacramento every time you use Amazon, at no cost to you. AmazonSmile is available at smile.amazon.com on your web browser and can be activated in the Amazon Shopping app for iOS and Android phones. When you shop at AmazonSmile, you’ll find the exact same low prices, vast selection and convenient shopping experience as Amazon.com, with the added benefit that AmazonSmile will donate 0.5% of your eligible purchases to the charitable organization of your choice. You can choose from over one million organizations to support.

How do I shop at AmazonSmile?

Please choose Environmental Council of Sacramento Inc. as your nonprofit of choice. Thank you from all of us at ECOS.

Sacramento Investment Without Displacement, of which ECOS is a member, sent a letter to UC Regents regarding our concerns about Aggie Square.

Below is an excerpt from the letter.

We are writing this letter to appeal to you and the Board of Regents to request that UC Davis and its developer Wexford Science and Technology commit to signing a Community Benefits Agreement (CBA) with our broad coalition. We believe that this project could bring great possibility and promise for the future of Oak Park and other nearby neighborhoods, the City of Sacramento and UC Davis Medical Center, if the benefits are shared widely and equity and inclusion are embraced as core values.

Before this project’s Environmental Impact Report is approved, it is a moral imperative that the UC system consider our community coalition and the impacted community we represent. The leaders of our coalition are requesting a meaningful conversation with UC Davis and its developer to address inequities and unintended consequences of this project.

The Oak park community is mostly made up of people of color, low-income people and immigrants who have carried a heavy burden for generations in the history of the development of this region. Unfortunately, deep poverty, violence, inadequate affordable and safe housing, employment discrimination and the many subtle actions of hate have deeply wounded countless promising young and old souls alike. Residents have a list of concerns about how the build-out and operation of Aggie Square will impact their neighborhoods. 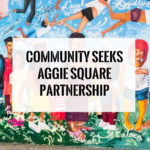 Aggie Square is described as a “game changing partnership” that will bring innovative opportunities to the area surrounding the UC Davis Medical Center on Stockton Boulevard. Local residents say they don’t want to be losers when the project, which will include the building of spaces for research facilities, academic programs, offices, retail and mixed-use space,and housing, kicks into gear.

Kim Williams, of Sacramento Building Healthy Communities says the Aggie Square project should benefit everyone in the surrounding area, not just a certain part of the population.

SacIWD is a coalition of community organizations and neighborhood associations. Coalition members have been working together for almost two years and say the proposed Aggie Square project at UC Davis Medical Center “has the potential to improve and protect residents’ health, provide residents with access to good union jobs that pay a living wage, improve the quality of our neighborhoods, and reduce existing inequities.” Members want to make sure area residents in the 95817, 95820 and 95824 zip codes aren’t summarily boxed out, and priced out, by the Aggie Square project.

“While neighborhoods surrounding Aggie Square will be altered by the many thousands of new workers and students at Aggie Square, with a recent estimate as high as 25,000, and the flow of billions of dollars, the traditional avenues of resident involvement will be weakened, and those communities already on the fringes are likely to be further silenced,” reads a statement from the group.

“This is about building with our community,” HUB Director Kim Williams said.