WHEREAS, the Lower American River provides a beautiful place for Sacramento-area families to connect with nature, enjoy quality outdoor time together, and inspire children to learn about science; and

WHEREAS, the Lower American River and the American River Parkway generate about 8,000,000 visitor days per year making this resource one of the most popular recreational areas in the Sacramento region; and

WHEREAS, the Lower American River, the American River Parkway, and Sutter’s Landing Park provide vital habitat for a wide variety of wildlife including the Swainson’s Hawk (California threatened species), the White-tailed kite (species of special concern), river otters, and many other wildlife species; and

WHEREAS, there are very limited opportunities for Sacramento area residents to access the southern banks of the Lower American River or enjoy significant natural areas along the river’s southern banks within the City of Sacramento; and

WHEREAS, Sacramento area residents have rated parks, trails and recreation areas as the amenities most in need of investment and have rated large habitats for walking and hiking where interpretive and educational programs can take place as their top priority for the type of park and recreational facilities to be provided in the future; and

WHEREAS, the City of Sacramento has the opportunity to establish one of California’s most significant urban riverside parks by expanding Sutter’s Landing Park to the west of the existing park when these lands become available from willing landowners and protecting and restoring existing open space areas; and

WHEREAS, expanding and improving Sutter’s Landing Park will provide Sacramento diverse population with a tremendous natural area that can readily connect children and other community members with nature in the heart of our city; and

WHEREAS, each generation has a responsibility to leave our children and future generations with an improved environment and affordable recreational opportunities.

WHEREAS, the opportunity to place lands near Sutter’s Landing into public ownership has arisen, and should be seized;

WHEREAS, ECOS has long supported conservation of the American River Parkway and supports conserving and restoring the lands adjacent to Sutter’s Landing that are now in private ownership;

WHEREAS, it is important that the design process of the eventual public park be open and collaborative across Sacramento’s many communities;

WHEREAS, the park should have modern facilities, including adequate restrooms, and be designed to be accessible and useful for all;

2. Support educational programs at Sutter’s Landing Park and along the American River Parkway to provide children with information about the river’s contribution to the natural and cultural history of our region.

3. Support and allocate funding to make Sutter’s Landing Park one of California’s greatest urban natural oasis providing our communities and other visitors with ready connection to nature and one of America’s most beautiful rivers.

The Environmental Council of Sacramento (ECOS) has submitted a letter in response to the renewal of Measure U in Sacramento. The content of the letter is below.

The Environmental Council of Sacramento (ECOS) agrees with the concerns about the renewal of Measure U expressed in a recent letter from neighborhood groups and their supporters to the Sacramento City Council. We are also concerned that a permanent extension of the City’s local sales tax measure (Measure U) without significant changes in community engagement, budget process, and oversight will mean that City residents who will pay this tax will have no way to ensure that the funds collected are used for the greatest and most equitable community benefit.

ECOS generally supports the four proposals outlined in the letter submitted from the neighborhood groups:

We request that the City Council take formal action to adopt these requests before the November election. We look forward to working with you to institute these long-needed changes to the City’s planning and budget process.

On July 9, 2018 the Sacramento Housing Alliance and the Environmental Council of Sacramento submitted a letter to the Mayor of the City of Sacramento for the purpose of making inquiries into the adherence to the surplus land statute.

Here is an excerpt from the letter. Click here to read the full letter (PDF).

The Environmental Council of Sacramento (ECOS) and Sacramento Housing Alliance (SHA) are writing to inquire as to the City of Sacramento’s efforts to fully comply with the Surplus Land Statute, as amended by AB 2135 (Ting, Statutes of 2014)1, which requires prioritizing surplus government land for affordable housing. In short, the law requires all public agencies to offer surplus land to “housing sponsors” – that is, affordable housing developers –provided said developers have written and requested to be notified, and, should those sponsors express interest, enter into good faith negotiations for 90 days (Gov. Code, §§ 54222, 54223). Only if a compromise cannot be reached can the city sell it on the open market. We are proud to see that as our representative in the California State Senate, you voted in favor of AB 2135, which added important changes to the Surplus Land Act in 2014.

We are prompted to offer this reminder of the Surplus Land Act because of concerning trends in the sale of city properties. Reviewing recent sales of seven city owned lots, only one was sold to an affordable housing non-profit (City of Refuge, who plans to build a homeless shelter for women and children on the land). The other six were sold to for-profit entities. Most alarming is the case of 4722 9th Ave and 4601-4625 10th Ave, where the city rejected a proposal to build 130-195 affordable rental units in favor of market rate apartments.

A win for the Sacramento region!

While light rail trains on the Gold Line previously stopped running before 7:00 pm, they will now run until 11:30 p.m. Monday through Saturday, and 9:30 p.m. on Sunday!

How did this come to be?

Ten years ago, ECOS brought a lawsuit against Caltrans when it proposed adding lanes to Highway 50 to create High Occupancy Vehicle (“HOV”) lanes. Since these lanes are only restricted to High Occupancy Vehicles during certain hours, adding new lanes for this purpose is essentially just a widening of the freeway.

That lawsuit was settled in 2008 when Caltrans agreed to pay $7.5 million to SacRT for improved light rail service between Folsom and Sacramento, along the Highway 50 corridor.

ECOS met with SacRT to determine what funding from settlement of this lawsuit would help public transit the most along this section of Highway 50, and it was determined that expanding light rail service past 7:00pm would be best, so Caltrans settled by agreeing to provide funding for that purpose.

At ECOS, reducing vehicle trips is an essential part of our work, and new service like this goes a long way toward helping us reach our goals. This project will open up car-free options to many people, as trips that were only possible in a vehicle are now possible via public transit. We are proud to be a part of this effort.

The interaction between light pollution and predation could deal a heavy blow to species already struggling to survive. Bridges, in particular, often have lighting that shines into rivers at night, and attraction to these stationary lights can stop juvenile fish in their tracks as they migrate downstream, making them vulnerable to predators. Fish also frequently migrate and feed at night to hide from predators in the darkness, and bright lights shining on the water eliminate their protective cover. In rivers where salmon spawn, juvenile salmon can be especially impacted by bright nighttime lights or reflections on the surface of the water because predation is a major contributing factor to the high mortality of juvenile salmon. Light pollution from the iconic Sundial Bridge in Redding, California (shown above), was a suspected factor that contributed to the near loss of Sacramento River fall-run Chinook salmon from 2011–2013. 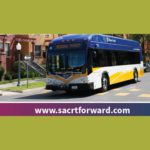 SacRT Forward will rethink the purpose and design of Sacramento Regional Transit’s entire transit network by exploring wholesale changes to the network, including a “blank slate” look at how to position transit competitively long-term in the Sacramento region.

We need to hear from you. Your input will help inform the project team about which key choices to make about the future of the SacRT transit network.

Join the conversation – Responses will be collected through May 15, 2018. There will be additional opportunities to provide input on the SacRT Forward Network Plan throughout this year. Get started below!