It is not good that proposed large master plan projects are located outside of the County’s Urban Services Boundary. “The county zoned [this] area as agricultural and has numerous policies in place to protect agricultural land. These projects would eliminate the remaining farmland and habitat of the Natomas basin, in Sacramento County, and weaken the Natomas Basin Habitat Plan.”

Portions of the front page article on April 18 regarding Natomas Basin Flooding were inaccurate and misleading. It’s important to correct the record.

The need for strengthening the levees along the Sacramento River are well known, not just for Natomas, but all the way to South Sacramento. And we all appreciate the support of the federal government to help keep Sacramento safe from flooding.

It’s important to recognize that much work has been completed in Natomas and the previous moratorium on construction has been lifted. Natomas now has a similar level of flood protection to the rest of the city. Thousands of housing units have been built, and thousands are currently under construction. But they are all in areas previously planned for housing within the city limits of Sacramento.

Housing developments in the adjacent farmland, outside of the city, are prohibited currently by Sacramento County’s Urban Services Boundary, approved in 1993. And that’s a good thing. It allows agricultural uses to continue, endangered species to survive in protected habitat areas, and contributes to the region’s economy and quality of life, and the build out of Natomas.

The article erroneously states that “The levee improvements are expected to help trigger important economic benefits, allowing more construction to occur.” This is not true. It goes on to say that “The Sacramento River flood threat has choked off development on new homes on the acres west of Interstate 80 and El Centro Road, and south of San Juan Road.” This is also not true.

The project area referred to includes proposed, but not approved, projects. The county zoned the area as agricultural and has numerous policies in place to protect agricultural land. These projects would eliminate the remaining farmland and habitat of the Natomas basin, in Sacramento County, and weaken the Natomas Basin Habitat Plan. This plan which requires one half acre for acre that is developed with the city limits was a state and federal requirement to allow North Natomas to be developed in the first place. The future of North Natomas along with the protected species will be endangered if new projects of thousands of acres are ever approved.

The abandoned Joint Vision for Natomas, approved by both the city and county of Sacramento, called for development to occur only in the city limits, and agriculture and habitat to be done in the unincorporated areas of the county. It still makes sense.

While it’s a developer’s dream to buy prime farmland for cheap, and have it approved for development, the “highest and best use” in unincorporated North Natomas is farming and habitat.

On July 15, 2021, ECOS, along with Habitat 2020, Friends of the Swainson’s Hawk and the Sierra Club Sacramento Group sent a letter regarding the South Airport Industrial annexation proposal in North Natomas.

We urge you to delay consideration of the proposed LAFCo MOU until you have an approved Memorandum of Understanding with the wildlife agencies for the process you will follow to comply with the Natomas Basin Habitat Conservation Plan (NBHCP) while considering annexation of 450 acres outside your permit area. The NBHCP is a contract between the City and state and federal wildlife agencies that sets the terms of its permits to develop in Natomas. The purpose of the Plan is to preserve the populations of threatened wildlife in the Basin while allowing some City and Sutter County development. This contract states that “Because the effectiveness of the NBHCP’s Operating Program is based upon CITY limiting total development to 8,050 acres within the City’s permit area . . . , approval by either CITY or SUTTER of future urban development outside of their respective Permit Areas would constitute a significant departure from the Plan’s Operating Conservation Program.”

Photo by Brett Sayles from Pexels

On March 23, 2021, John Roberts, Executive Director of the Natomas Basin Conservancy, presented to ECOS about the Natomas Basin Habitat Conservation Plan. It was an excellent and provocative presentation, and now we understand more about the Plan and have a sense of the difficulties ahead.

The Natomas Basin Conservancy is the entity responsible for implementing the Natomas Basin Habitat Conservation Plan. John Roberts is their first and only director. Roberts is an economist by training whose career has focused on managing non profits in the Sacramento region. He previously managed the California Rice Growers Association and the Metro Chamber of Commerce.

“In essence, the Conservancy provides refuge and sanctuary for wildlife displaced by urban activity in the Natomas Basin. Annual biological monitoring by independent third parties demonstrates wildlife is thriving on Conservancy-owned mitigation land.”

The Kassis property includes 40.7 acres that form an alluvial terrace on its upper plateau, and a lower basin that stretches along the river in the 100-year floodplain. There are 335 trees in the formations, split by a grassy, 30-foot-high bluff at the edge of a quiet neighborhood. For years, the property was owned by John P. Kassis. After his death, its title transferred to members of his family.

“Concerns about this project? Where to start?” said Ralph Propper, president of the Environmental Council of Sacramento. “We’re very concerned about protecting the last significant open space along the American River.”

Where is the Kassis Property?

Here is a map showing exactly where the property is. 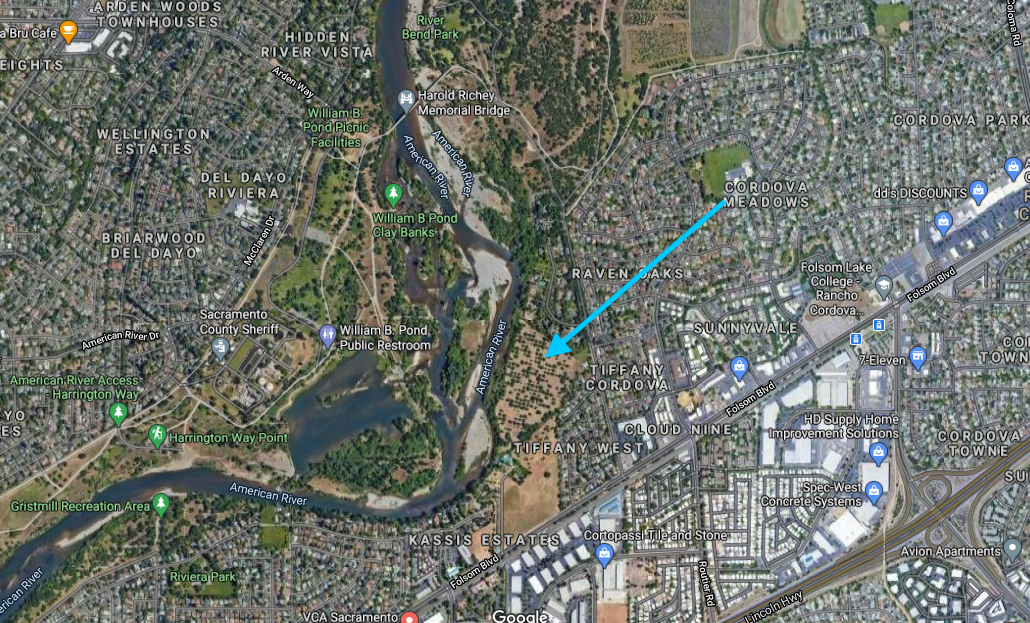 By Cathryn Rakich
July 2020
Inside Sacramento

Unaware they are trespassing on land owned by the Sacramento Kings, hundreds of snowy egrets and black-crowned night herons have taken up residence in a deserted oasis on the north side of Sleep Train Arena.

From a chain-link fence surrounding the grassland, the birds can be seen gliding among cement slabs and rebar, the foundation for a baseball stadium project led by Greg Lukenbill in the late 1980s that never came to fruition.