A coalition of environmental and community groups applying pressure on Elk Grove decision-makers was instrumental in stopping the construction of a 13-story hospital with helipad next to a sensitive habitat area. While California Northstate University (CNU) previously proposed building the hospital at the edge of the Stone Lakes National Refuge, it recently announced its relocation to the Sleep Train Arena in North Natomas (June 16, 2021).

The coalition, including ECOS’ Habitat 2020, the Audubon Society, Sierra Club and the Friends of Stone Lakes, met with Elk Grove Planning Commissioners. Coalition members expressed concerns about noise, light pollution and construction activity that would harm refuge wildlife such as Swainson’s Hawks, Sandhill Cranes and Burrowing Owls, particularly during roosting periods. In addition, helicopter flights and the massive hospital building itself would pose a danger for bird strikes; helicopter-bird strikes could also lead to loss of human life. The Stone Lakes Refuge sits within the Pacific Flyway, a major North American migration route for birds.

The environmental coalition, along with neighbors, also argued that placing a level 2 trauma center hospital in a 200-year flood plain despite existing city prohibitions would be a very bad idea. (Additionally, flooding could increase due to climate-induced sea level rise and possible atmospheric river events.) This issue proved to be a major factor in Elk Grove Planning Commissioners’ 5-0 recommendation to deny the project. The project’s proponents subsequently elected to seek other sites for their hospital.

An incidental wetlands and habitat area has developed at the Sleep Train Arena site in the excavated area for a failed baseball stadium; the pond is surrounded by mature trees and has become a resource for wildlife, including many bird species. ECOS’ Habitat 2020 Committee is drafting a letter to support its protection.

Many nearby residents and environmental groups, including the Sacramento Sierra Club [and the Environmental Council of Sacramento], were opposed to the planned hospital’s location which would have neighbored the Stone Lakes National Wildlife Refuge.

A consultant from Ascent Environmental, which conducted the environmental impact review for the hospital project, suggested the school could consider at least three alternatives during the planning commission meeting last week.

…the Elk Grove Planning Commission unanimously rejected the project plans, citing concerns about the location of the proposed medical center.
…the proposed hospital is still eligible to go before the Elk Grove City Council, which would have a final say on the project.

“This is a poorly located project to serve Elk Grove proper, being located at the furthest southwest corner of this city,” Wieser said. “I’m not against a high-rise. There are places in our city for a building of this size, but this is not the right location.” 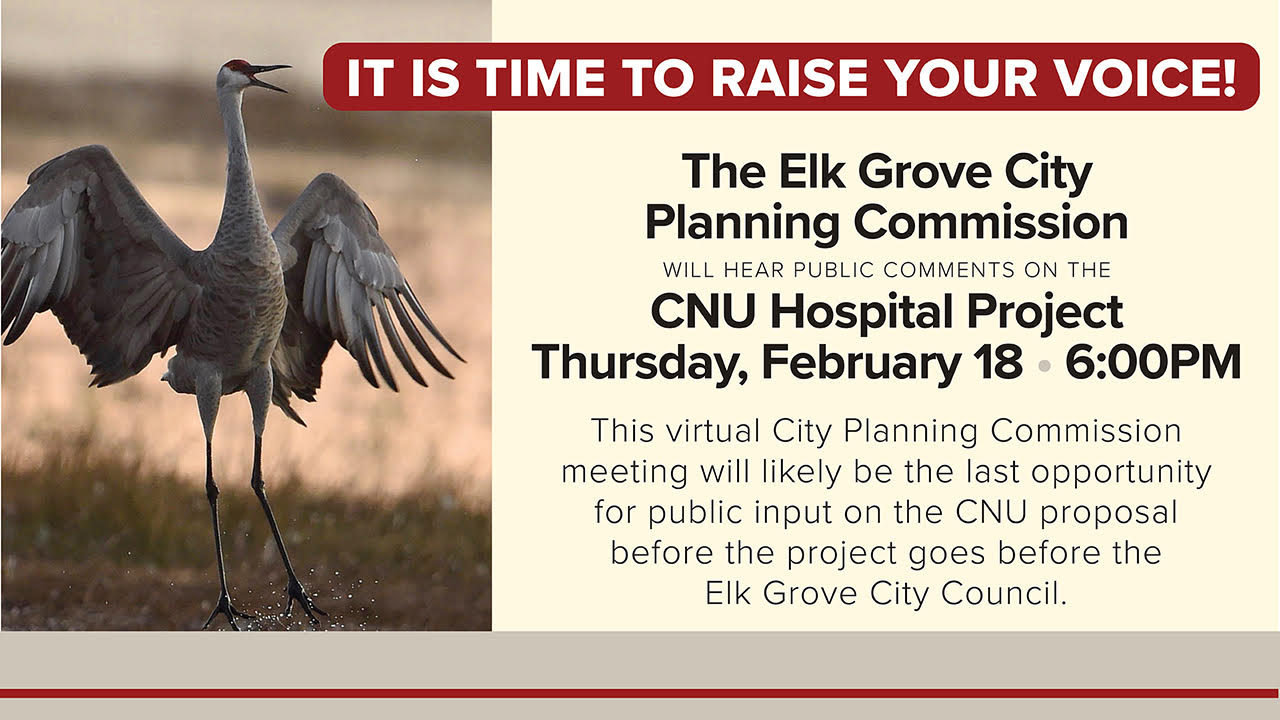 The California Northstate University Hospital/Wet Lab project is going for a recommendation at the Planning Commission meeting on February 18, 2021 at 6:00 p.m.

Are you worried about the impacts the CNU Wetlab/Hospital Project would have on our community and surrounding wildlife?
➡️ Contact the City of Elk Grove Planning Commission. Voice your concerns about the project to City Planning officials, using the prefilled email on the Responsible Elk Grove website.
➡️ Sign up for email updates at bit.ly/REG-email-signups.
➡️ Engage and share the updates on our Facebook page.
Learn more at ResponsibleElkGrove.org.

We need folks to submit comments about this poorly planned hospital development. To learn more about our concerns, click here.

“I know that OSHPD (Office of Statewide Health Planning and Development) and some of the standards that are put on (the construction of) hospitals are pretty onerous and that the oversight is pretty strict,” he said. “So, I don’t know. I know that they like to be aggressive and assertive in what they do. If they think it’s realistic, okay. But it seems awfully optimistic.”

Hume additionally told the Citizen that he has a variety of concerns regarding California Northstate University’s proposal to build a teaching hospital in the Stonelake neighborhood.

“I’ve got all kinds of concerns,” he said. “Does it fit? Do they address some of the concerns that were raised here (at the meeting) tonight with respect to traffic and circulation and flooding and floodplain and neighborhood issues?