In an effort to improve safety for pedestrians and bicyclists accessing transit, the Federal Highway Administration (FHWA) and Federal Transit Administration (FTA) have released a new guide, which includes a variety of approaches to address common safety issues that are likely to arise near transit stations, bus stops and other places where transit (bus or rail) is operated.

The new guide, Improving Safety for Pedestrians and Bicyclists Accessing Transit, provides agencies with a thorough look at pedestrian and bicyclist safety considerations in accessing and using transit. The guide can help transit agencies, state and local roadway owners, and regional organizations by providing a comprehensive understanding of how to address pedestrian and bicyclist safety concerns related to accessing transit.

Additional resources and information on FHWA efforts to improve safety for all road users can be found here.

Good news! On July 18, 2022, the Environmental Council of Sacramento (ECOS) and Caltrans settled the lawsuit over Caltrans’ plan to widen the Capital City Freeway bridge over the American River. Caltrans agreed to do these as part of the project:

• Include a bike-ped facility as part of the bridge widening, with access to both river levees.
• Provide enhanced bat habitat in the vicinity of the bridge.
• Mitigate loss of salmonid habitat, such as adding shade trees along the river.

And, in the design and environmental review of the subsequent and larger Cap City Corridor project from Midtown Sacramento to El Camino Avenue, Caltrans agreed to address induced demand, and assess the structural capacity of the bridge to accommodate potential future light rail trains.

Caltrans issued a “notice of preparation” five years ago for an environmental impact report (EIR) for plans to widen from three to five lanes each way the Capital City Freeway (SR 51) over the American River from Midtown Sacramento to El Camino Avenue (3.4 miles). Caltrans never produced the EIR. Instead, last year, it released a “mitigated negative declaration” for widening the east side of the CapCity bridge as part of a “deck replacement” project.

From the start, the plans for widening caused us concern for the increased traffic this would induce, along with the related increases in air pollution and greenhouse gases. When we realized Caltrans intended to proceed with the east side widening with no true environmental analysis, ECOS sued. Attorney Don Mooney of Davis, CA represented ECOS in the suit. ECOS thanks those who contributed to fund the lawsuit.

VISION FOR A CONNECTED SACRAMENTO REGION

Imagine over 1,000 miles of trails connecting you to the region’s favorite destinations. Pretty cool, right?

The Sacramento Regional Trail Network will spark a new wave of walking, biking, and rolling to daily destinations throughout the region. Imagine a network of trails that makes it easy for families to ride to their favorite park, provides a safe route for children to get to school, and offers a simple way for residents to explore new corners of their neighborhoods and cities.

The network envisions reliable routes to the best places around the region for all ages, and abilities. 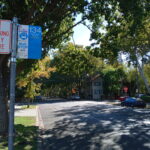 On October 27, 2021, ECOS sent a letter to the City of Sacramento in support of its application for a Sustainable
Transportation Planning Grant for its 15-Minute Neighborhoods Plan.

The Environmental Council of Sacramento (ECOS) supports the City of Sacramento in its application for Sustainable Transportation Planning Grant for its 15-Minute Neighborhoods Plan.

We served on the Mayors’ Climate Change Commission’s Transportation Technical Advisory Committee. As you know, the prioritization of active transportation, then transit and shared mobility, and then zero-emission vehicles was unanimously adopted. This prioritization, coupled with housing around transit, would reduce GHG emissions, increase affordable housing with good local and regional access to shops and jobsites, improve air quality, and improve physical safety for pedestrians and cyclists.

Over half of Sacramento’s greenhouse gas emissions (GHG) are from the transportation sector. The City’s proposed 15-Minute Neighborhoods Plan will set the stage for increased transit use, walking and biking — travel modes that are essential to reduce GHG and meet our climate goals.

Sacramento’s topography is relatively flat and its neighborhoods are interconnected – these are two necessary but not sufficient preconditions for a large shift to walking and biking for daily errands and for job commutes. Neighborhood studies show that slowing driving is a big concern.

The City’s 15-Minute Neighborhoods Plan will calm the entire network of neighborhood streets to make comfortable places to walk, bike, and scoot. Calmer streets will encourage more trips by active transportation, helping the city to meet its goals around sustainability, speed reduction for cars and trucks, community health, and thriving local businesses. The City’s 15-minute Neighborhoods Plan will further the following:

• The City’s Climate Action Plan;
• The City’s commitment to equitable processes by engaging neighborhood communities about their needs;
• Economic vitality of our retail and restaurants within and next to neighborhoods;
• Affordable and efficient access to jobsites, parks, and schools.

Your survey response will help Caltrans plan for biking and walking near you. Please click through the following screens to identify concerns that you believe need to be addressed to improve walking and biking on and along State Routes near you.

Photo by PNW Production from Pexels

ECOS submits this letter during the public comment period through April 4 for the subject report. We would like to express our support for the Stockton Boulevard Corridor Study.1 We appreciate the City’s focus on reallocating the Stockton Boulevard street space for walkers, bikers, transit riders, and motor vehicle drivers, as Stockton is a major arterial with a number of regional employment centers. The proposed streetscape changes will improve conditions for pedestrians and bicyclists, increase safety and mobility, and set the stage for infill development. Infill development along a major transit line is an important strategy to increase the region’s supply of affordable housing and reduce greenhouse gas emissions.