A win for the Sacramento region!

While light rail trains on the Gold Line previously stopped running before 7:00 pm, they will now run until 11:30 p.m. Monday through Saturday, and 9:30 p.m. on Sunday!

How did this come to be?

Ten years ago, ECOS brought a lawsuit against Caltrans when it proposed adding lanes to Highway 50 to create High Occupancy Vehicle (“HOV”) lanes. Since these lanes are only restricted to High Occupancy Vehicles during certain hours, adding new lanes for this purpose is essentially just a widening of the freeway.

That lawsuit was settled in 2008 when Caltrans agreed to pay $7.5 million to SacRT for improved light rail service between Folsom and Sacramento, along the Highway 50 corridor.

ECOS met with SacRT to determine what funding from settlement of this lawsuit would help public transit the most along this section of Highway 50, and it was determined that expanding light rail service past 7:00pm would be best, so Caltrans settled by agreeing to provide funding for that purpose.

At ECOS, reducing vehicle trips is an essential part of our work, and new service like this goes a long way toward helping us reach our goals. This project will open up car-free options to many people, as trips that were only possible in a vehicle are now possible via public transit. We are proud to be a part of this effort. 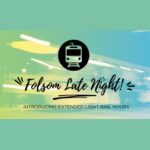 ECOS helped bring this about with our Highway 50 HOV lane lawsuit! While we weren’t able to stop extra lanes being added to the freeway, we were able to get the light rail trains that run between Sacramento and Folsom (servicing neighborhoods in between such as the University area, Tahoe Park, College Greens and Rancho Cordova) to run past 7:00 pm! While light rail trains on the Gold Line previously stopped running before 7:00 pm, they will now run until 11:30 p.m. Monday through Saturday, and 9:30 p.m. on Sunday!

More info about the increased service hours at http://www.sacrt.com/apps/folsomlatenight/.

More info about this settlement at https://www.ecosacramento.net/tag/hov-lanes/.

The city of Sacramento is laying plans to ban new gas stations, drive-through restaurants and marijuana cultivation businesses within a quarter-mile of light-rail stations, saying those areas should be reserved for transit-oriented and pedestrian-friendly uses.

The goal, officials say, is to boost rail ridership at 23 light-rail stations around the city and give more residents the chance of living a car-free lifestyle by paving the way for higher-density housing, job-rich offices and pedestrian-oriented retail in those areas.

On November 16, 2009, following settlement of a lawsuit between Caltrans and the Environmental Council of Sacramento (ECOS), SacRT and Caltrans entered into an agreement to provide funding for the Sacramento-Folsom Limited Stop Service to operate 15-minute frequency service between Hazel and Sunrise light rail stations after completion of the double-tracking project.

Due to financial limitations, SacRT has yet to complete enhancements that would allow for 15-minute service and no construction is imminent. The last train to Folsom departs downtown Sacramento at 6:18 p.m. Because of this limited evening service, many residents along the Highway 50 corridor do not use light rail service for fear of being stranded after work without a transit option. Later service would benefit residents of the eastern part of the county, while reducing congestion and airborne pollutants.

Therefore, ECOS supports reprogramming the 2009 settlement funds to allow SacRT to provide late night service. We ask Caltrans and SacRT to sign the concurrence letter that would allow for this money to be used for that purpose.

SacRT Forward will rethink the purpose and design of Sacramento Regional Transit’s entire transit network by exploring wholesale changes to the network, including a “blank slate” look at how to position transit competitively long-term in the Sacramento region.

We need to hear from you. Your input will help inform the project team about which key choices to make about the future of the SacRT transit network.

Join the conversation – Responses will be collected through May 15, 2018. There will be additional opportunities to provide input on the SacRT Forward Network Plan throughout this year. Get started below!

Sacramento Regional Transit, for its part, will upgrade its light rail service along that corridor in several ways.

Beginning in June, SacRT will expand night-time service to Folsom until midnight. Currently, Folsom service stops at about 7 p.m. making the rail system unusable for late-hour workers and people going to the downtown arena or other evening events.The agency plans to follow that by adding 15-minute service to and from Folsom instead of the current 30-minute arrivals.

The most notable transit change, though, will be the introduction as early as 2020 of limited-stop express trains during morning and afternoon commute hours on the Gold Line, potentially cutting 10 or more minutes off the trip between Folsom and downtown.

That service is not likely to begin until 2020 or 2021, SacRT officials said.

The plan came together last week when local environmentalists and Caltrans resolved a years-long dispute over the state’s efforts to expand Highway 50, an environmental representative said on Friday.

Initially, the Environmental Council of Sacramento (ECOS) and the city of Sacramento opposed adding carpool lanes on Highway 50 in downtown, contending it was a narrow, car-focused and ultimately unsatisfactory solution to east county congestion.

More recently, city officials have looked more favorably on the plan, and have cooperated with Caltrans to use some related project money to make improvements to city streets near Highway 50 in the downtown area.

That includes money to turn 14 blocks of Broadway, near the Department of Motor Vehicles headquarters, into a more pedestrian and bicycle friendly street, and build a new block-long street just east of 28th Street between X Street and Broadway, allowing drivers to use X Street instead of Broadway to access the Highway 99 southbound on-ramp..

For its part, ECOS twice sued Caltrans to stop Highway 50 carpool lane plans. The most recent of those lawsuits became the fulcrum for last week’s negotiated deal.