A special thank you to all who came out to the 6th annual Sacramento Wild and Scenic Film Festival On Tour on November 23rd, 2015! Nearly every seat was filled! Thanks to our generous sponsors and community partners, we enjoyed another successful program of environmental education and inspiration.

Thanks to ClimatePlan for featuring the Environmental Council of Sacramento’s response to the Sacramento region’s draft Sustainable Communities Strategy!

Sacramento has released a draft of its 2016 Sustainable Communities Strategy (SCS)—its second plan, after its first in 2012 led the state toward better planning. The plans should coordinate land use and transportation, to help make communities healthier and reduce greenhouse gases.

Comments on the new draft plan were due Monday, November 16th, 2015

Below is a quick summary of our comment letter on Sacramento’s draft 2016 plan. Read the full letter here.

But we are concerned: there are big disparities between the regional plan and the plans adopted by the region’s cities and counties.

The region’s jurisdictions must overhaul their growth plans to align with the regional plan. Otherwise, its many benefits—including more housing and transportation choices for residents, biodiversity and farming resource protections, and reducing greenhouse gases—may never come to life.

Overall, much to applaud

Perhaps the most impressive thing about the plan is that its growth scenario reduces vehicle miles traveled, or VMT, through true land use and transportation behavior change—putting destinations closer together and reducing the need to drive.

A few more things to fix

Here’s more detail on where we’d like to see improvement:

We support the recommended scenario. But the region could do even better, and we were disappointed to see Scenario 3, the most sustainable, dismissed. Now we’d like to see:

– The real picture: Compare performance (on VMT/GHG) between the preferred scenario and a “business-as-usual” scenario that reflects cities’, towns’ and counties’ existing plans. “Business as usual” will put the region far beyond its required greenhouse gas targets; let’s confront that reality.

– Focus in existing communities: Look at the performance of an “all-infill” land use scenario in which twenty- year growth is constrained solely to existing “Established Communities.” There’s plenty of room; the region’s current density is extremely low.

Shift from sprawl to infill

Despite the growing demand for walkable neighborhoods near good public transit, current and planned development continues to churn out car-oriented suburbs far from services. Sixty percent of jurisdictions’ planned growth is greenfield development.

The regional and local plans are hugely out of joint: for example, current general plans estimate eight times more growth in “Rural Residential” areas than in the SCS.

At the same time, major infill proposals are not capitalizing on their potential. For example, the Sacramento Railyards–one of the largest contiguous infill opportunities in the nation–is currently amending its proposal to reduce its residential capacity by half.

1) There’s a direct increase of VMT and GHG emissions from the development itself.
2) The regional government must allocate funding to more roads to service those communities, further limiting funding that could be used for transit.
3) Finally, that peripheral growth prevents the density needed to provide the ridership and fare recovery to maintain the transit system.

Build for transit and fund it earlier

Much more funding is needed for transit operations earlier in the plan. Early investment will help guide development around transit—with the walkable neighborhoods that more people want.

SACOG can help incentivize better development, by funding only projects that comply with the regional SCS, following the model of the “One Bay Area” grant program. Jurisdictions should have to show performance on VMT/GHG and air quality, as well as equity, public and ecological health.

Rounding is an error: Hit the greenhouse gas target

The SCS nearly meets the greenhouse gas emissions (GHG) reductions targets imposed by the CA Air Resources Board. However, 15.58% does not equal 16%. Saying so sets a bad precedent.

It may sound like a small amount but it means many tons of air pollution.

We strongly urge the Board to adopt a scenario that achieves that extra .42% reduction, or better, goes beyond the 16% target.

We appreciate the GHG analysis that SACOG provides, but would like to it go further: a 2050 scenario would help show whether the current trajectory will keep the region on track.

SACOG is dedicated to public participation, but its travel modeling and investment strategies are hard to understand. We need better tools to understand where investments are going from cap & trade and for disadvantaged communities.

Address gentrification and displacement with more affordable homes near transit

SACOG is making continued improvements in its public health and social equity inputs and analyses, but more is needed.

Right now, lower-income communities are poorly served by transit. That needs to change for many reasons, including meeting the region’s required GHG reductions targets, because the data show that lower-income residents will use transit more—if it is available.

The biological impact analysis in the 2016 update is much improved. We’d still like to see maps that show how growth would affect regional connectivity and ecosystem viability, as well as local species needs.

The plan estimates development of 47,563 acres of wild or agricultural lands in the next 24 years—that’s a lot less than the 214,000 acres consumed in the previous 24 years. While we think the region could do better, given the current growth behavior of the region, we fear the impact will be much worse.

We applaud SACOG’s progress in development of the 2016 MTP/SCS update. We call on all of the region’s jurisdictions to support it, with serious changes to their growth patterns and policies.

We thank our partners and SACOG and look forward to continuing to work together to improve the region’s plan—and its future.

ECOS has many years of experience participating in SACOG’s regional planning process, as well as in issues related to SB 375 implementation. In this work, ECOS coordinates with many regional and state-‐wide partners, some of which have chosen to sign in in support of this letter.

We applaud SACOG’s progress in development of the 2016 Metropolitan Transportation Plan/Sustainable Community Strategy (MTP/SCS) update, and we call on all of the region’s jurisdictions to make the serious changes to their growth patterns and policies that will be necessary to make this Sustainable Communities Strategy a reality.

See our comments by clicking on the letter above or here. 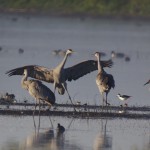 This comment letter is not intended to be exhaustive as pertains the myriad of problems with the tunnels project now reborn as “California WaterFix,” but rather it is intended for us to officially go on the record opposing this project because of the enormous deleterious environmental impacts in our region, and because of the inadequate analysis in the RDEIR/SDEIS as well as the inadequate avoidance, mitigation and and minimization measures proposed to address those impacts.

See our comments submitted on October 30, 2015 by clicking on the letter above or here.

See our comments submitted on November 8, 2015 by clicking on the letter above or here.

We enjoyed a memorable and inspiring evening with so many of our friends, colleagues and allies at the 42nd Annual Environmentalist of the Year awards on Tuesday, October 13th, 2015! We are grateful for everyone’s participation and the community’s outpouring of support. Congratulations to all of the awardees: the Sacramento Urban Agriculture Coalition in Environmental Justice, Dana Gray for Artist Recognition, Veronica Beaty of the Sacramento Housing Alliance in Housing Advocacy, Michael O’Sullivan of the Sacramento Natural Foods Coop as Volunteer of the Year and Environmentalist of the Year Richard Guerrero of SEIU Local 1000! Photos by ECOS Board Member Anny Huang.

On September 28th, 2015, ECOS formally took a position of opposition against the Delta tunnels. We are especially concerned with the potential effects on the Stone Lakes National Wildlife Refuge south of Sacramento. To learn more about the proposed massive underground water export tunnels now called the “California Water Fix” please visit the Restore the Delta blog. On a media teleconference on September 29th, 2015, academics and Delta experts who are reading through the (now 48,000 page) Environmental Impact Report, shared what they have discovered about Jerry Brown’s controversial tunnels project.