It’s like a new city springing to life: 11,000 homes and apartments, seven public schools, a pair of fire stations, a police station, a slew of office and commercial buildings and 1,000 acres of parks, trails and other open space. Expected population: 25,000.

But will it have enough water?

As construction begins this month on the first model homes at Folsom Ranch, a 3,300-acre development in the city of Folsom south of Highway 50, state regulators continue to have questions about the project’s water supply. They still aren’t convinced the city has secured enough water to keep showers and spigots flowing as California contends with increasing uncertainty about rain and snowfall.

The drought, which officially ended last year, seems to have done little to impede development. No cities or counties appear to have curbed their development plans as a direct result of water-supply limitations,

Alan Wade, former president of the Save the American River Association, said it’s baffling state water officials would tell Folsom they had doubts about its water supply yet would let the development proceed.

“The reply from Folsom essentially told them to go pound sand: ‘We’re going to go ahead anyway,'” Wade said. “I don’t know how you can get away with that.” 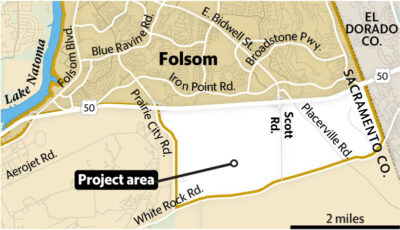