How do you think the Aerojet Area 40 Toxic waste site in Folsom should be cleaned up before it is developed into a park, open space and residential area?

A Public Meeting to Review and Comment on the Remedial Action Plan for the cleanup and development of the Aerojet Area 40 Toxic Waste site, which is South of Highway 50 will be held:

South of highway 50 just east of Prairie City Road, lies Aerojet Rocketdyne’s “Area 40”, a hazardous waste site waiting be cleaned up. Folsom and local developers are planning a 48-acre park with housing nearby within the Folsom Planning Area at the location of Area 40. A 26-acre “open space” will be fenced off until extremely high soil vapor levels drop to lower levels.

The Department of Toxics Substances (DTSC) released the proposed cleanup plan in May, and a Public Meeting will be held June 20 in Folsom.

The proposed cleanup plans are to remove 31,100 tons of contaminated soil from two areas on the site. Note that soil vapors move from the soil into the air. Extremely high levels of volatile organic compounds are in the shallow groundwater. The cleanup plans include measures to require vapor mitigation systems to move chemical vapors from under potential new housing.

How thorough will the cleanup be for the proposed new Community West Park near Prairie City Road? For the open space area north of the park? For the single-family high-density homes just north of the site, and for the commercial and multi-family units to the south?

Levels of contamination: The Remedial Action Plan (RAP) for Area 40 says that the site poses unacceptable risk to human and ecological health, which is true. However, the RAP does not mention that the levels of TCE in shallow groundwater, soil gas and even outdoor air are among the highest observed in California. The site has up to 120,000 μg/L TCE in shallow groundwater, which is 24,000 times the Maximum Contaminant Level (MCL) of 5 μg/L TCE. The site has up to 268 million μg/m3 TCE in soil gas, which is 8 million times the EPA default screening level for protecting residents from TCE vapor intrusion into indoor air. The levels of TCE are so high on portions of the site, that levels of TCE in outdoor air 4 foot above the ground pose a risk for fetal heart defects. Levels of TCE are likely to be even higher for infants or small children breathing closer to the ground and individuals laying or picnicking on the ground.

The City of Folsom and the developers are focused on whether the park can go into the proposed area. The risk assessment for human health is based on limited park use.

During the cleanup additional contamination may be found, which could change the scope or nature of the cleanup.

June 20: Learn about this site – make your thoughts known at the meeting scheduled for 6pm at the Folsom Community Center, Western Conference Room, 52 Natoma Street, in Folsom. 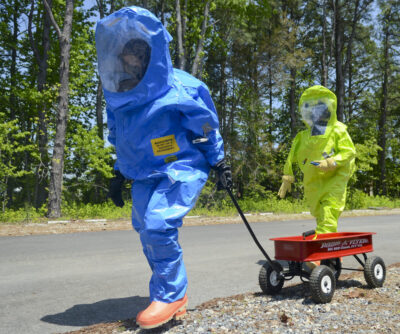