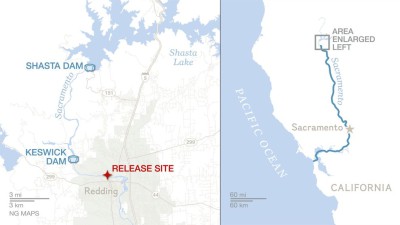 “The California drought, the state’s worst on record, has taken a terrible toll on those already-diminished winter Chinook salmon runs.

It’s not just that there isn’t enough water; there’s not enough cold water, especially after competing interests such as urban areas and big agriculture—each equipped with more political muscle than wild salmon advocates have—take their share. In 2014, the percentage of baby salmon that survived to head downstream was the worst that fishery officials had ever seen. In a normal year, about 25 percent of the eggs produce baby salmon healthy enough to migrate downstream; last year, with only 5 percent surviving their infancy in the unusually warm water, nearly the whole winter run was wiped out.

That’s why hatchery workers tripled the fish in the truck-lift this month.”

Posted in News and tagged Salmon.