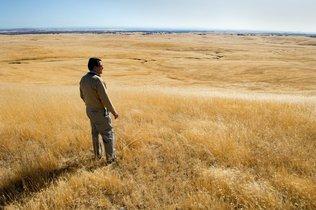 This project is classic leapfrog sprawl development with no adjacent development, and lies outside of the recently adopted Sacramento region Metropolitan Transportation Plan/Sustainable Communities Strategy (MTP/SCS). The enticement of the major regional amenity of a private university gave the Sacramento County Board of supervisors cover to approve the destruction of some of the finest remaining vernal pools in the Sacramento Valley. However, there is currently no university interested in the site, and there is general consensus that finding such a university is unlikely at best. The Environmental Impact Report only analyzed the “project as proposed” which included the university, ignoring significant additional impacts associated with the “no university” scenario and the mitigations to address them.

On March 1, 2013, ECOS and the Sierra Club filed a lawsuit challenging Sacramento County’s approving the Cordova Hills project. You can help support our effort by donating to ECOS’s legal fund (see sidebar).

In May 2014, ClimatePlan covered Cordova Hills in their review of statewide implementation of Sustainable Communities Strategies.

The Cordova Hills project was approved by the Sacramento Board of Supervisors on the 29th of January, 2013 and the notice of determination was recorded the next day. The project as proposed is on 2,667 acres, of which 2,119.7 acres will be urbanized, 302.4 acres will be avoided or used for agriculture or recreation (sports park), and 246.6 acres will be reserved for a university/college campus center. 1.3 million square feet of retail are planned. 8000 homes are also planned with a population of 21,379.

The project site is within the Mather Core Recovery Area for vernal pools, an area designated as the highest priority for vernal pool conservation. The mitigation for these vernal pools is anticipated to occur through the South Sacramento Conservation Plan (SSHCP) which has yet to be adopted, and it should be noted that a significant compromise was achieved in the SSHCP that balanced the loss of these and related pools with the regional benefits of the Plan. As such there remain uncertainties as to how effective the mitigation will be both within the Plan as well as in the absence of the Plan, if it is never finished and implemented.

The broader issue with the project relates to its satellite location, generating elevated vehicle-miles traveled (VMT) and air pollution associated with living in and driving from that location. The remote location of the Project creates difficulties for the region to meet its obligations under AB 32 and SB 375 as well as the SIP for ozone. The Project proponents, realizing this problem, had earlier included a 6000 student self contained university (College of Sacramento, a religious university that was to be operated by the Legionnaires of Christ) as part of the project which allowed for reductions in calculated VMT based on a greater number of local trips associated with either attending or working at the University. The College of Sacramento has since folded and no new university candidate has been located. All of the analysis in the EIR for air pollutants and greenhouse gases were calculated with the presence of a self contained university. Without the presence of the university being directly tied to development (through phasing or other mechanisms) the proposed analysis including the university did not reflect the likely reality of how the project would develop. The county’s department of environmental review and assessment (DERA) and the project proponent both claim that they are only required to analyze the project as proposed, and as proposed the project includes a university.

Donate to ECOS’s legal fund to help support our effort to stop the Cordova Hills project!

ECOS is a Section 501(c)(3) nonprofit organization and your donation is tax deductible but nonrefundable. Click on the “Donate” button to pay on-line with a credit card or a PayPal account. If you prefer to donate with a check, please mail it to:

The project site is located outside the boundary of the Metropolitan Transportation Plan Sustainable Communities Strategy (MTP/SCS) SCS adopted by the Sacramento Area Council of Governments (SACOG) in 2012. Dramatic deviations from the SCS, though not inhibited by any specific regulatory requirement, impact the strategy such that the options for successfully meeting the regional greenhouse reductions become increasingly limited. Please se the link below to SACOG’s analysis, but in short, SACOG’s findings conclude that development of Cordova Hills, with or without a university, would pose significant challenges to the region’s ability to meet the required GHG reduction targets, and much more so without a university. The project proponents state that since there is no specific regulatory requirement for GHG, and since the SCS is voluntary, there is no requirement for them to participate. As well, since they adamantly see the project as containing the university, they claim that VMT is well within the guidelines established by the county in the general plan and therefore not a problem.

The project is also inconsistent with the Ozone State Implementation Plan (SIP).   While the project proponents did prepare a best case 35% air quality mitigation plan, which was endorsed by the Air Quality Management District, the project would need to mitigate its ROG and NOx emissions by 100% for the project to be consistent with the SIP.  The project’s inconsistency with the SIP and the SCS could jeopardize the approval of projects already in the SIP and SCS, which are more appropriately located from a VMT and emissions perspective, since those emissions will invariably need to be made up elsewhere. And that is the best case scenario with the university in place. The situation deteriorates much further as relates the SIP with the absence of the university.

The next proposal not compatible with the Sacramento Sustainable Communities Strategy is the proposed expansion of the Elk Grove Sphere of Influence. The first DEIR for this expansion is no longer available on the web, but a re-release of the DEIR is expected in March or April, 2013. ECOS comments on the first DEIR can be found here.