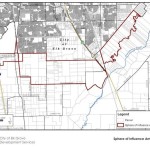 Location of the proposed expansion of the Elk Grove Sphere of Influence. Click on image to view full size.

Elk Grove wants to expand its size by 30 percent

What’s really scary? Elk Grove wants to expand its size by 30 percent, with concrete covering the farmland and wildlife habitat south of the City. That is the plan that Elk Grove has submitted to the Local Agency Formation Commission (LAFCo), a little known public agency responsible for ensuring orderly development and protection of open space and farmland. You can help defeat this proposal and help LAFCo make better choices for our region. Check the LAFCo website for updates and sign up at the ECOS website for action alerts.

We need your help NOW!

LAFCo begins hearings soon on Elk Grove’s request to include 8,000 acres south of its current city limits within its Sphere of Influence. Approval would give the city a green light to annex and develop the land. This request is the largest urban expansion ever to come before LAFCo.

LAFCo staff recommendation includes a “Regional Enhanced Alternative,” which is a reduced footprint scenario for the SOI of 4000+ acres. Since there has been no demonstration of any need for expansion beyond current Elk Grove’s city limits to accommodate growth, ECOS remains in full opposition to the alternative recommendation as well.

Please send a letter or email to the Commissioners at:

Elk Grove’s leaders would have us believe they simply want to plan for their future and improve their job housing balance. Others have tried to characterize the issues as jobs vs. environment. But there is regional significance far beyond that simple calculus. Here are ten reasons why LAFCo should turn down Elk Grove’s overreaching request:

Lack of need, questionable prospects for job growth and uncertainty of enough water for already planned growth stand in marked contrast to the high agricultural and habitat value of the SOI lands and the threat to successful implementation of an important HCP. Much better that LAFCo convey to Elk Grove the need to act consistent with adopted regional plans and to focus on job growth within its existing 3000 vacant acres. In the meantime, give the HCP a reasonable chance to succeed and provide an opportunity to establish certainty of an adequate water supply. That is the regionally responsible course of action for LAFCo.

A different version of this article appeared as an op-ed in the Sacramento Bee on Oct. 26, 2013.